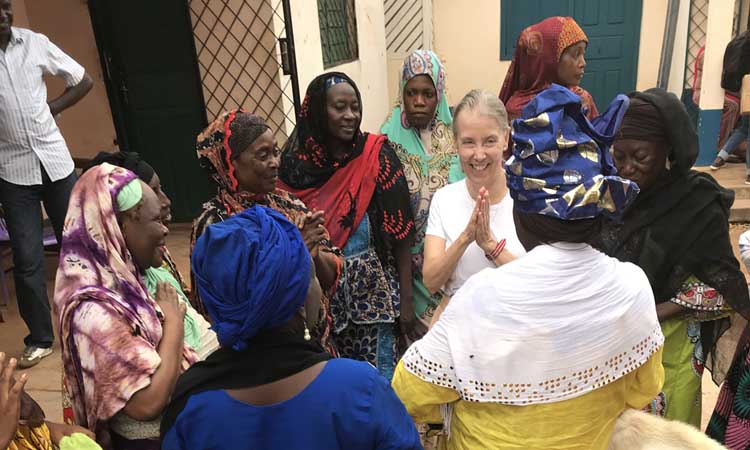 BANGUI – On Saturday August 10, U.S. Ambassador to the Central African Republic, Lucy Tamlyn, visited multiple Muslim organizations in Bangui to wish the Muslim community a happy, healthy, and safe Tabaski (Eid al-Adha). At each stop, she presented the community with a goat, a traditional Eid al-Adha meal.

Ambassador Tamlyn made her first stop at the Mosquée Central de Bangui (Bangui Central Mosque), in the PK5 district of Bangui. There, she met with Imam Moussa Tidjani. The two discussed mutual concerns over security, economic opportunity, and education.

Next, the Ambassador visited the Organisation des Femmes Musulmanes Centrafricain (The Organization of Muslim Women in the Central African Republic). Ambassador Tamlyn encouraged the women to make use of the MLK Center at the U.S. Embassy, which is open to the public and offers many free resources, including Internet access and books in English.

For her final stop, Ambassador Tamlyn met with the Association des Commerçants du KM5 (The Traders’ Association). They thanked the Ambassador for her attention to their community, and she stated her intention to continue to meet with them to keep the dialogue going.

At all three locations, Ambassador Tamlyn conveyed a message to the Muslim community in the Central African Republic on behalf of the American people: Best wishes for a happy, healthy, and safe Tabaski. Eid Mubarak!