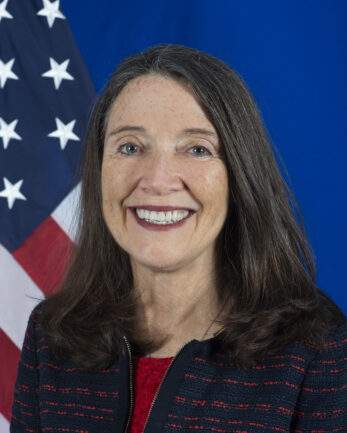 Ambassador Patricia A. Mahoney is a career member of the Senior Foreign Service, class of Minister-Counselor. She was sworn in as United States Ambassador to the Central African Republic on March 23, 2022.

Prior to this position, Ms. Mahoney served as Ambassador to the Republic of Benin from March 2019 to February 2022.  She held senior leadership positions as Acting Deputy Assistant Secretary for Southeast Asia in the State Department’s Bureau of East Asian and Pacific Affairs and as Deputy Chief of Mission at the American embassies in Kampala, Uganda and Kathmandu, Nepal.  Ms. Mahoney also served as director of South Asia for the National Security Council along with other assignments domestically and abroad.